At Fastpath, we talk a lot about taking a risk-based approach to monitoring and securing your financial systems. What do we mean when we say that? We mean that even though there are lot of risks inherent in any financial system, not all of them are created equal. The most obvious, common, and accessible ones should have good controls first. 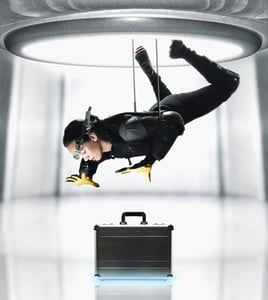 For example, if we’re talking about securing your home, locking your doors and windows is an obvious first step.

Worrying about Tom Cruise rappelling from the ceiling to steal the figurines your Aunt Mabel left you comes later,

after you’ve locked your doors and windows and probably after you’ve put in a security system, armed guards, dogs, and lasers. In the real world, the chances of Tom Cruise picking your place to rob are pretty slim, regardless of how cool Aunt Mabel’s figurines are.

For companies, taking a risk based approach works the same way. Controls around cash and cash management, issuance of payments and receipt of cash come first. Controls around assets, inventory, and credit issuance are also important, but usually come after cash and can vary widely based on industries.

For companies with highly sought after items, think Heineken or Apple, cash risk is still critical, but inventory risk is right behind that. It’s easy to convert their products to cash.  In contrast, a septic cleanout company rarely has product disappear from their trucks. Risks are different for different companies, that’s why we recommend a risk based approach to ensure that risks are addressed from high to low, in that order.

First, there was China Animal Healthcare which saw four years of original financial records disappear when the truck they were traveling in was stolen.  Tom Cruise probably took them. Apparently no one saw putting four years of original financial records on one truck as a problem.  Even Enron wasn’t that creative. They would have loved to see four years of records disappear. Records theft like that is pretty low risk, when it’s not an inside job, but loss of the truck through theft, fire, accident, etc. might have at least been foreseeable.

In our second story out of China, a group of gangsters, allegedly led by a former director, stormed the headquarters of Shanshui Cement Group and removed or destroyed “certain books, records, important documents, and electronic data”. Shanshui has other financial issues which could be behind this report, but it’s a fun tale nonetheless.

Gangsters storming headquarters is the financial equivalent of Tom Cruise rappelling in from the roof. I suspect that both of these firms had a lot more traditional control issues before these events happened. If those had been addressed, we might not have these great stories as illustrations.

At Fastpath we’ve got some great software to help you understand, evaluate and adjust the controls in your financial system. Unfortunately, truck theft recovery and gangster repellent are not part of our tools. However, we can deliver Tom Cruise for an astronomical fee. Contact us to learn more.

Where does Fastpath fit in your organization?