In GP, a user can close a period by checking the box next to a series (Financial, Sales, Purchasing, etc.) in Administration>Setup>Company>Fiscal Periods. 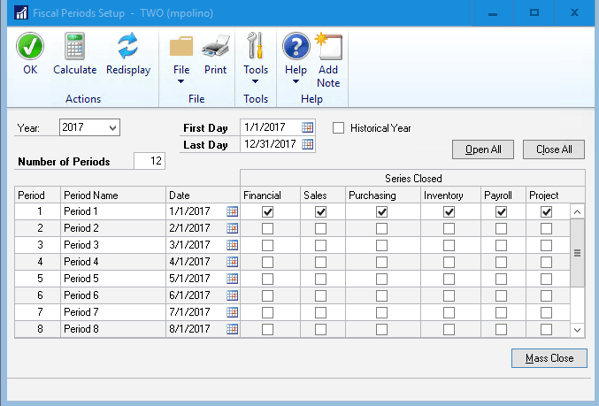 This process locks access to the underlying individual windows controlled by that series for the closed period. For example, closing the Financial series, closes things like Bank Deposit Entry underneath. The Mass Close button on the Fiscal Periods Setup window can be used to open or close individual items under the series. Most users don’t delve into the Mass Close area and simply check the box to close one or more series for a period. 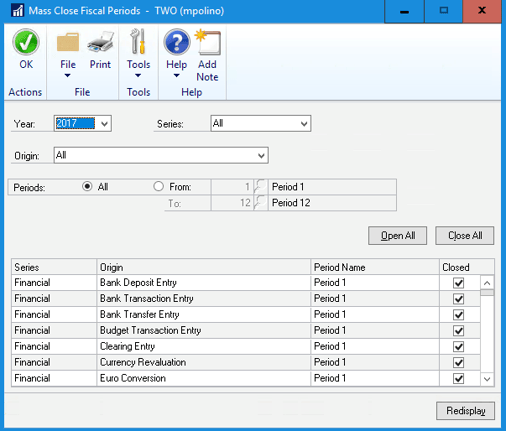 Checking a series to close in the Fiscal Periods Setup window changes the related Pseries column from 0 to 1. For example, checking the box for the Financials series will change pseries_1 from 0 to 1. The records have an forigin (first origin) of 1. The Closed column is not updated for these records. The Series column shows 0 for these rows. Only the Pseries is updated for the series record.

The Pseries columns relate to:

When the Mass Close items are closed, either manually, or by closing the series, each item is updated to change closed from 0 to 1.

Each item also belongs to a Series, but the series numbering is different.

For the details windows, the corresponding series are:

For most firms, the best option is to audit changes to this table, then filter the results where Series=0 to limit the data to changes made to each series. Then review changes to the PSeries columns to see where fiscal periods were opened and closed for each series.

Technology Effects on Audit and IT Security: Internal & External Impacts