1.) Commander, tear this ship apart until you find those plans! And bring me all passengers, I want them ALIVE!

Well, you can say this for Darth Vader, at least he had detective controls to identify that the plans for the first Death Star had been stolen. Of course, if he’d used Fastpath’s Assure to review his user’s access and identify separation of duties conflicts, he could have fixed his user’s access or built mitigating controls to prevent the theft in the first place. 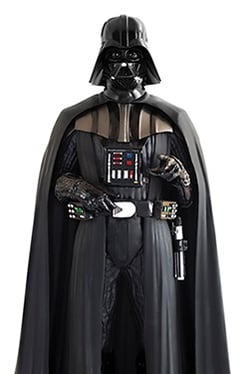 2.) Many Bothans died to bring us this information.

Vader managed to lose the plans to the Death Star not once, but twice. After figuring it out the first time, you would think he would have installed Audit Trail from Fastpath to audit his user’s access and really control those plans.

3.) Listen to them, they're dying R2! Curse my metal body, I wasn't fast enough, it's all my fault! My poor Master.

With Luke, Han, Chewie and Princess Leia seconds away from getting crushed in the garbage compactor, R2D2 hacks into the Death Star’s controls and shuts down the garbage chute. Earlier, he queried the system and found the location of Princess Leia in the detention center. R2 had way too much access. Clearly the Death Star wasn’t using Fastpath’s Identity Manager. If they had been, R2’s user would have required approval to be setup and the level of access would have been reviewed prior to approval. Darth Vader or Grand Moff Tarkin could even have approved it directly from Outlook, though probably not in time to save our heroes.

Even the Galactic Empire seems to have a problem with orphaned users. It seems clear that this code should have been retired and the rebel commandos not allowed to land on the moon of Endor. Config AD from Fastpath gives security management for ERP back to IT allowing them to more globally manage access. In systems like Microsoft Dynamics, this can eliminate orphaned users who have been removed from Active Directory but still exist in the ERP system.

5.) For over a thousand generations, the Jedi knights were the guardians of peace and justice in the old Republic... before the dark times... before the empire.

If the Jedi had used Fastpath’s Audit View, they could have gotten regular emails with separation of duties conflicts from Assure and critical data changes from Audit Trail. For example, this would have made it much more difficult to erase Kamino from the Jedi database to hide the cloning facility. Heck, all of Episode II Attack of the Clones could have been avoided. As for Episode 1, I can’t do anything about that, even George Lucas isn’t perfect.

Despite the all seeing power of the force, a solid set of security, audit, and compliance tools and best practices could have made a huge difference in the future of the galaxy.